This guide aims to provide tips and strategies for defeating the Phoinix in Asphodelos: The Third Circle (Savage).

The Third Circle (Savage) is the third raid encounter in the Pandaemonium series, available January 4, 2022 in Patch 6.05. Players must have completed the Quest “Who Wards the Warders?” and talk to Nemjiji in Labyrinthos (X:8.4, Y:27.4). Players must be item level 580 or above to challenge this fight in a non-premade group.

The Phoinix has a hard enrage of roughly 11:03, depending on how fast the add phase is completed, and requires roughly 42.2k raid DPS to defeat before then.

Assign all players a partner of the opposite role and range - two tanks with two ranged DPS, and two healers with two melee DPS. Assign each of these groups a numbered marker from one to four. Split these groups into two light parties of one tank, one healer, and two DPS each for the adds phase and Fountain of Fire - a north/east light party and a south/west light party. For Firestorms of Asphodelos, these partners will be with the same role - tanks with ranged, and healers with melee. 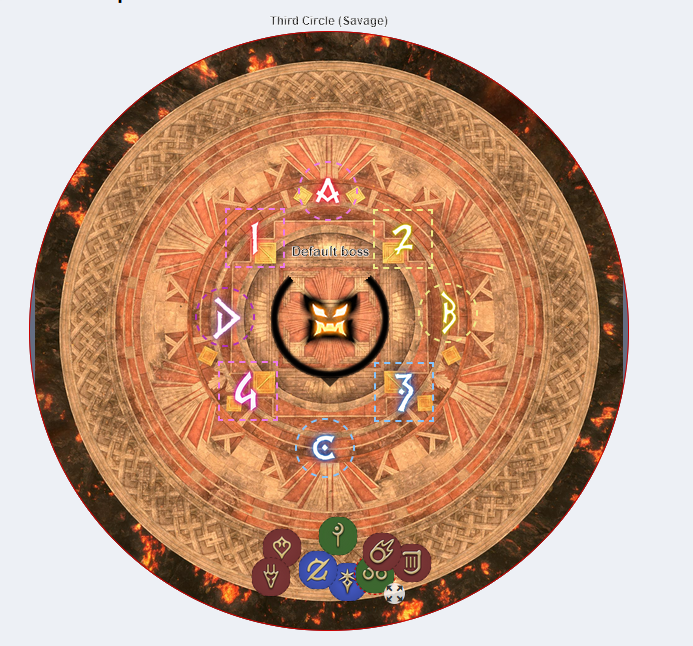 Two tethers appear on random non-tanks. These tethers must be picked up by tanks and brought far apart at the front of the boss, as they do a magical tank buster in a large AoE when the castbar resolves.

The boss will cast either eight small fire orbs or one large fire orb when the castbar finishes.

The boss will cleave the left side or right side of the arena relative to where it is facing. This will inflict a damage down to any players hit.

Spawns a Darkened Fire add under tanks/healers or DPS that has a damage taken reduced buff. If they are too close to each other they will tether and explode. These start casting Darkened Blaze as they spawn, and must be killed before it is allowed to finish. Players should stand with their partner at their marker to bait these.

Marks each player with an AoE and a number from one to eight. The Phoinix will breathe fire on each player sequentially, dealing light damage and inflicting a fire resistance down debuff for a few seconds. If a Darkened Fire add is hit by four Brightened Fire AoEs, it will remove the buff that they have preventing them from taking damage.

A line of fire appears at cardinals and slowly moves towards the center, leaving intercardinal quadrants safe.

AoE markers appear under all players. Bait together and move to dodge.

The boss will become untargetable and jump to an edge of the arena. Either its middle head or its two side heads will glow.

Four Sunbird adds will spawn during Phase Two. These must be picked up by tanks. These will pulse a large AoE when being revived, and if any Sunbird corpse is in it the boss will receive a damage up buff that will eventually wipe the raid.

A massive raidwide AoE that deals magic damage. It will revive all dead Sunbirds and make them grow larger. Revived Sunbirds will retain the enmity table they had before they were killed. If large Sunbirds were revived, they will turn into Sparkfledged and attach to the boss.

Each revived Sunbird will tether to a tank, healer, and two DPS. Those players in turn will be tethered to a player who does not have a tether of the opposite role. When the castbar resolves, the Sunbird will dash to the tethered player and then the subsequent tethered player, dealing proximity physical damage and inflicting a Blunt Resistance Down debuff.

Marks all tanks and healers or all DPS with a Sparkfledged pointing towards a cardinal direction. These will spawn on their location and emit a large conal AoE in the indicated direction.

The boss will cast either eight small dark orbs or one large dark orb when the castbar finishes.

Spawns two sets of four fountains starting from the north/south or east/west of the arena and going clockwise. These fountains must be soaked by a player, and inflicts the player standing inside with Trickle of Fire, which massively boosts healing potency for six seconds.

Marks the two closest players to the boss with an AoE marker. This deals moderate magic damage and inflicts a Fire Resistance down debuff. This AoE will drop a Sunbird Pinion on the player, which will do a proximity tether to them, then dash to them after a while.

A catastrophic raidwide AoE that deals magic damage. This will summon burning rain once more, and spawn Darkblaze Twister fire tornadoes north, southwest, and southeast on the arena.

Shoots two sets of three conal AoEs in sequence. Move into one of the conal AoEs after it goes off.

The boss will tether to each of the Darkblaze Twisters. One tether will be dark, and two tethers will be fire. The fire tethered tornadoes will do a donut AoE around them, and the dark tethered tornado will do a knockback.

Inflicts players with one stack, two stacks, or four stacks of Death’s Toll. This must be removed by getting hit by a fatal mechanic for each stack.

A catastrophic raidwide AoE that deals magic damage based on the player’s missing HP.

Enrage is a hardcasted Final Exaltation that occurs after the final Scorched Exaltation, wiping the raid after a 10 seconds cast.

As the fights have just released, there are no strategies set in stone. I would highly recommend the strategies listed in this guide, as they are simple and effective. This guide will be updated with strategies once they are commonplace.