This guide aims to provide tips and strategies for defeating Hesperos’s first form in Asphodelos: The Fourth Circle (Savage).

The Fourth Circle (Savage) is the fourth raid encounter in the Pandaemonium series, available January 4, 2022 in Patch 6.05. Players must have completed the Quest “Who Wards the Warders?” and talk to Nemjiji in Labyrinthos (X:8.4, Y:27.4). Players must be item level 580 or above to challenge this fight in a non-premade group.

As this is a door boss, there is no loot acquired from this phase.

Hesperos’s first form has a hard enrage of 7:12 into the encounter and requires roughly 48.2k raid DPS to defeat before then, the highest of the tier.

Assign all players a clock spot and a role-based partner. Assign each partner a marker spot from one to four. Assign two light parties of one tank, one healer, and two DPS each. Tanks and healers often have to do mechanics together and will be referred to as the support role. 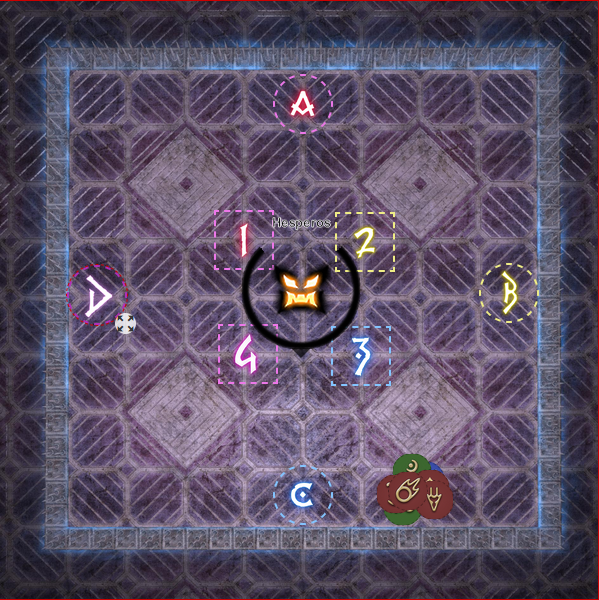 A tank buster on the current main tank that deals heavy magic damage in an AoE. After hitting the first time, it will hit a second time. Tank swap during the cast or use an invuln.

One of the major mechanics of the fight. Hesperos will charge his blade and tether to the stage, four players of a role, or all eight players. This will do heavy magic damage to all players tethered and he will gain the Aethersucker buff. This indicates the role that cannot take certain mechanics he will perform next - either tanks and healers (support), or DPS.

Hesperos charges his sword, converting the Aethersucker buff gained from Bloodrake to a Role Call buff indicating players who can take a subsequent mechanic.

Inflicts four random players with the Role Call debuff and consumes the boss’s Aethersucker buff. When this debuff expires, the player will die if they matched the role that was taken by Bloodrake, but will not have any effect if they are of the opposite role. This debuff can be passed to another player by standing on them, and players who pass a debuff cannot take another one.

Tethers four random players which deals moderate damage in an AoE around them when the castbar resolves. However, if the player matches the role absorbed from Role Call, they will die.

Changes the scene to form four areas - Levinstrike (lightning), Acid (poison), Well (water), and Lava (fire). Each of these will do a mechanic when triggered, as well as deal damage in their quadrant.

Begins to trigger the stage’s Mekhane mechanics in order of which they pulse.

Inflicts all players with an Acting Role debuff, which can only be removed by soaking two orbs of the indicated role.

Inflicts all players with Elemental Resistance Down, which make them take extra damage from elemental quadrants absorbed by Bloodrake.

Hesperos summons eight orbs at the edge of the arena. These will tether to the closest player and mark itself with the role of said player. This indicates the Acting Role that needs to soak them, which deals heavy damage. In addition, they need to be soaked by two players at a time, or else it will deal lethal damage.

All elemental quadrants explode, dealing damage. Players must stand on the quadrant not tethered by a previous Bloodrake in order to take non-lethal damage due to the debuff inflicted by Elemental Belone.

Places four towers at the intercardinals of the arena. These must be soaked, but cannot be soaked by the role indicated on the tower. 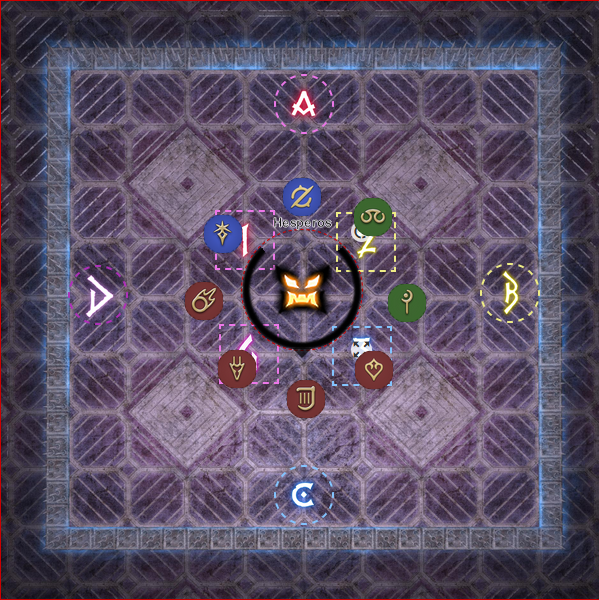 If not brought below 50% HP, Hesperos will enrage at 7:12 into the fight, going invulnerable and casting a Decollation that wipes the raid.

As the fights have just released, there are no strategies set in stone. I would highly recommend the strategies listed in this guide, as they are simple and effective. This guide will be consistently updated with new and efficient strategies as they are discovered.