This guide aims to provide tips and strategies for defeating Hesperos’s second form in Asphodelos: The Fourth Circle (Savage).

The Fourth Circle (Savage) is the fourth raid encounter in the Pandaemonium series, available January 4, 2022 in Patch 6.05. Players must have completed the Quest “Who Wards the Warders?” and talk to Nemjiji in Labyrinthos (X:8.4, Y:27.4). Players must be item level 580 or above to challenge this fight in a non-premade group.

Eight of these tokens can be traded in for chest gear or a weapon at a Pandaemonium gear vendor.

Hesperos’s second form has a hard enrage of 8:25 into the encounter and requires roughly 47.9k raid DPS to defeat before then.

Assign all players a clock spot. Assign two light parties of one tank, one healer, and two DPS each. In addition, assign each melee/tank and ranged/healer a number from one to four. These will be used to soak towers later into the fight. 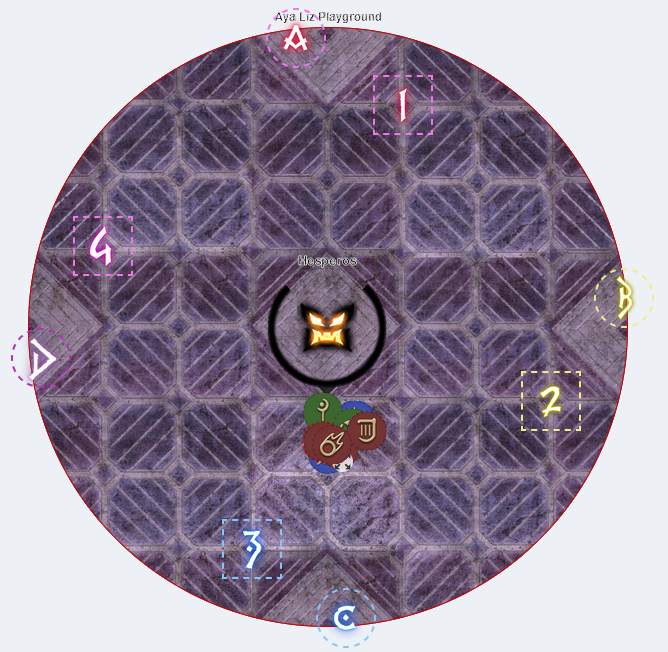 The fight is split into several Akanthai Acts. Each Act is preceded by Hesperos showing mechanics that will be cast with thorns on the arena. He will tether to thorns with Wreath of Thorns, showing the order of the mechanics cast. Thorns can represent towers, tethers to players, or large explosions. Tethers to towers will be represented with the Thornpricked debuff. Players can also be tethered to other players. All tethers are broken by distance.

This thorn will be a large semi-circular AoE on the outside of the arena.

This thorn will be a tower that players have to soak, dealing moderate damage and inflicting a Lightning Resistance Down debuff and a Magic Vulnerability Up debuff.

Two players will be tethered together with a fire (red) symbol on top. When this tether is broken, both players will take AoE damage that must be shared by two other players. All players damaged will receive a Magic Vulnerability Up debuff.

One player will be tethered to a thorn with a dark (purple) symbol on top. When this tether is broken, all players will take heavy magic damage and be inflicted with a Magic Vulnerability Up debuff. In addition, this will trigger the tethered thorn’s Hemitheos’s Fire IV if applicable.

One player will be tethered to a thorn with a water (blue) symbol on top. When this tether is broken, there will be an AoE around the player that deals moderate damage and inflicts a Magic Vulnerability Up debuff. In addition, this will trigger the tethered thorn’s Hemitheos’s Thunder III.

This thorn will knockback from the center of the arena.

The Finale has eight Thunder III thorns around the middle of the arena in a circle. In addition, there will be two thorns at opposite intercardinal edges which tethers four players of a role (tank/healer or DPS) with Aero III.

The Curtain Call has eight Dark IV thorns at cardinal and intercardinal edges that tether to one player each.

AoEs will appear on the ground under all players. Bait these together and dodge.

An AoE tank buster on two targets chosen by promixity to the boss.

A devastating tank buster on the main tank in an AoE around them. This must be shared with the off tank and mitigated, or invulned by themselves.

A heavy tank buster on the two players with the highest enmity. This will inflict an uncleansable bleed DoT for 15 seconds.

Hesperos jumps to the furthest player, knocking back all other players that are caught in the radius. This deals moderate magic damage to the player jumped to and inflicts a Magic Vulnerability Up debuff.

Hesperos turns to each player in order and does an AoE around them, dealing moderate magic damage and inflicting a Magic Vulnerability Up debuff.

As the fights have just released, there are no strategies set in stone. I would highly recommend the strategies listed in this guide, as they are simple and effective. This guide will be updated with strategies once they are commonplace.