Editor’s Note: We’re working with the author of this guide to port this guide natively to the Balance website, but this will take some time given the size of the guide.

If you’d like to view the current iteration of the guide as it is, please do so by clicking here!

Dragonsong’s Reprise is the fourth Ultimate to be released in FFXIV. Added in Patch 6.11, the fight is mechanically fast-paced and features multiple strict DPS checks on patch. It can be unlocked at the Wandering Minstrel in Old Sharlayan (X:12.7, Y:14.2) after completing Asphodelos: The Fourth Circle (Savage).

Everything here is subject to change as I learn more about specificities of strats, see more of how different groups perform different mechanics, and figure out what works best in terms of document formatting. I hope this document proves useful to your early prog while we’re all trying to figure out this fight! Needless to say, heavy spoilers ahead. Continue at your own risk if you’re looking to go blind.

I will be updating this document frequently with new phases and their respective mechanics as I see and understand them.

Currently working on: Phase 5 and Phase 6

Let me know if anything’s wrong, if there are any inconsistencies, or if you have suggestions for areas of improvement in the doc on Discord at Nashira#0615.

The first phase of the fight will have you facing the original trio from The Vault dungeon in Heavensward: Ser Adelphel, Ser Grinnaux, and Ser Charibert. Clearing this phase will trigger a checkpoint and cause further pulls in the instance to begin at Thordan. The limit bar gauge will be capped at two bars in this phase.

Another thing worth noting is that throughout the entire fight, if you fail to execute a mechanic correctly but survive, you will be afflicted with a 50% damage down that lasts three minutes.

A possible setup for markers is as follows: 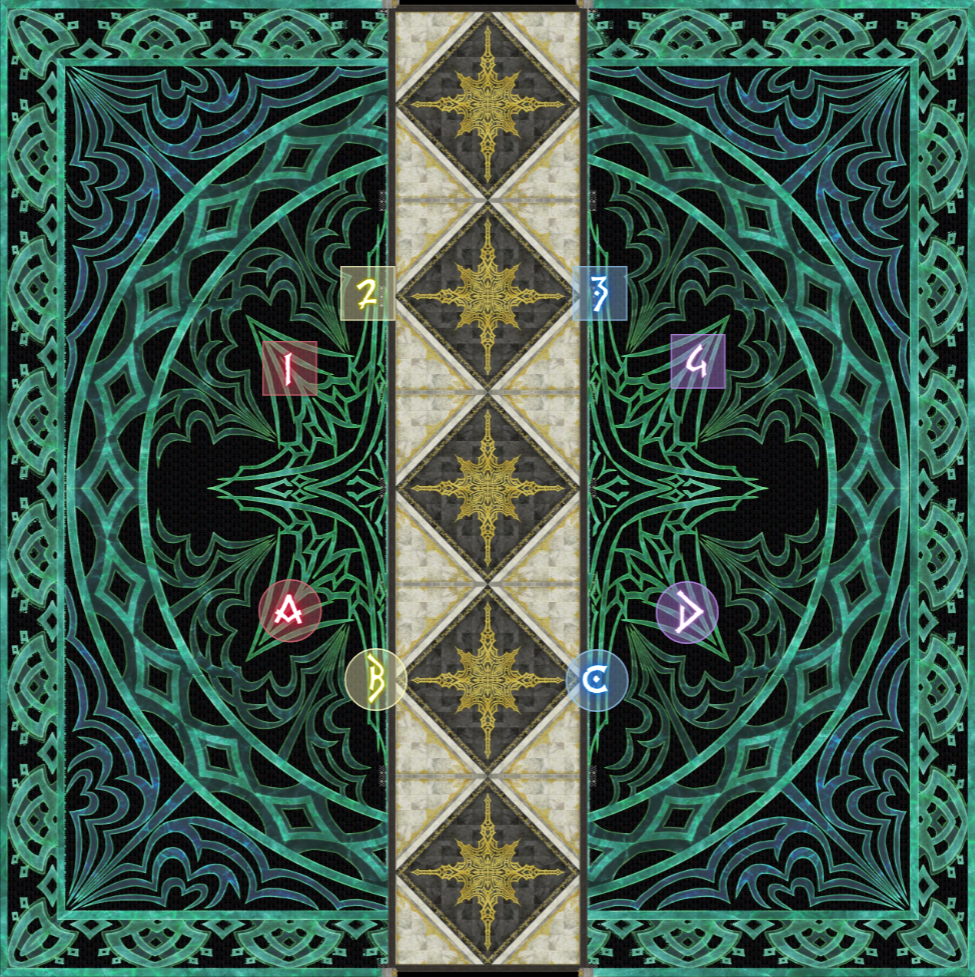 First, establish where people will bait the Hyperdimensional Slash Earthshakers.

Light Party setups can be helpful going into the last mechanic of this phase, Pure of Heart. You could assign one light party to have left protean baits and the other to grab right protean baits.

This is primarily a two boss phase consisting of Ser Grinnaux and Ser Adelphel. They’ll need to be tanked by separate tanks but they can be stacked together for double target damage.

Keep a close eye on their health percentages. If one is killed before the other, then they’ll cast Bull’s Steel/Brightblade’s Steel and become impossible to kill. The cast time is very quick. Make sure to have them both at about a 1% difference before burning them down.

A tether appears on a random player. This needs to be grabbed by a tank for the following tankbuster and heavily mitigated. The party and the non-tethered tank will need to stack up and mitigate the following shared AoE.

Two sets of Earthshaker markers will randomly target four people each. Each set of four marked players will be shot with a wide line AoE that will spawn a portal at its edge. At the same time, the unmarked people will be hit by a conal AoE targeted randomly on an unmarked player. If the portals are too close to each other, then they will tether to each other and detonate, causing a wipe. If a player is too close to a portal, it will tether to them and kill them instantly.

Ser Grinnaux knocks back all players relative to his location

Ser Adelphel will spawn on a random cardinal edge, cast a Holiest of Holy raidwide and begin dashing four times, spawning orbs in his path, which kill those that are hit. After the four dashes, Adelphel strikes the highest enmity target with a small AoE tankbuster. These orbs can tether to the portals from the previous mechanic and will detonate, wiping the party.

Ser Adelphel’s dash pattern goes clockwise/counter-clockwise, across, opposite of the first movement (CW/CCW), then across again. This pattern takes an hourglass shape.

Ser Adelphel will begin casting a heal on Ser Grinnaux, this needs to be interrupted or Ser Grinnaux will recover 30% of his HP.

Four pairs of symbols will appear on eight random players. These indicate the player pairs that will be chained soon after. These chains need to be broken immediately by distance, or both chained players will begin receiving heavy damage.

Soon after, every player will be hit with individual circular AoEs that deal heavy damage and afflict them with a magic vuln up. These will kill others if they overlap.

DPS will get: two circles, one triangle, and one square.

Tanks will get: one square, one cross.

Healers will get: one triangle, one cross.

Soft enrage. Damage buff & full heal for both Grinnaux and Adelphel if cast goes off. Ser Grinnaux will then immediately start casting a Full Dimension, killing everyone at the end of the cast. This happens when one of Ser Grinnaux or Ser Adelphel dies too soon before the other or after a certain period of time as a soft enrage.

Haurchefant will block Ser Zephirin’s spear outside of the circle during Pure of Heart, receiving damage until death and creating raidwide shockwaves during each tick while alive. He will also gain an infirmity debuff which reduces his health regeneration from external sources by 100%.

DPS Check. Ser Grinnaux will chain everyone within a small circle, exiting this circle will kill you instantly. Meanwhile, Ser Charibert will begin casting Pure of Heart. Once his cast finishes he will deal damage to players proportional to the percent of his remaining health. Bring him below ~20% for transition to the next phase.

Two players at a time will be targeted by protean waves baited on the closest players. Players hit by the protean will later receive a five second Skyblind debuff and drop a Twister at their location when the timer hits zero, dealing heavy damage to those in it. These can be baited away from the initial protean position. 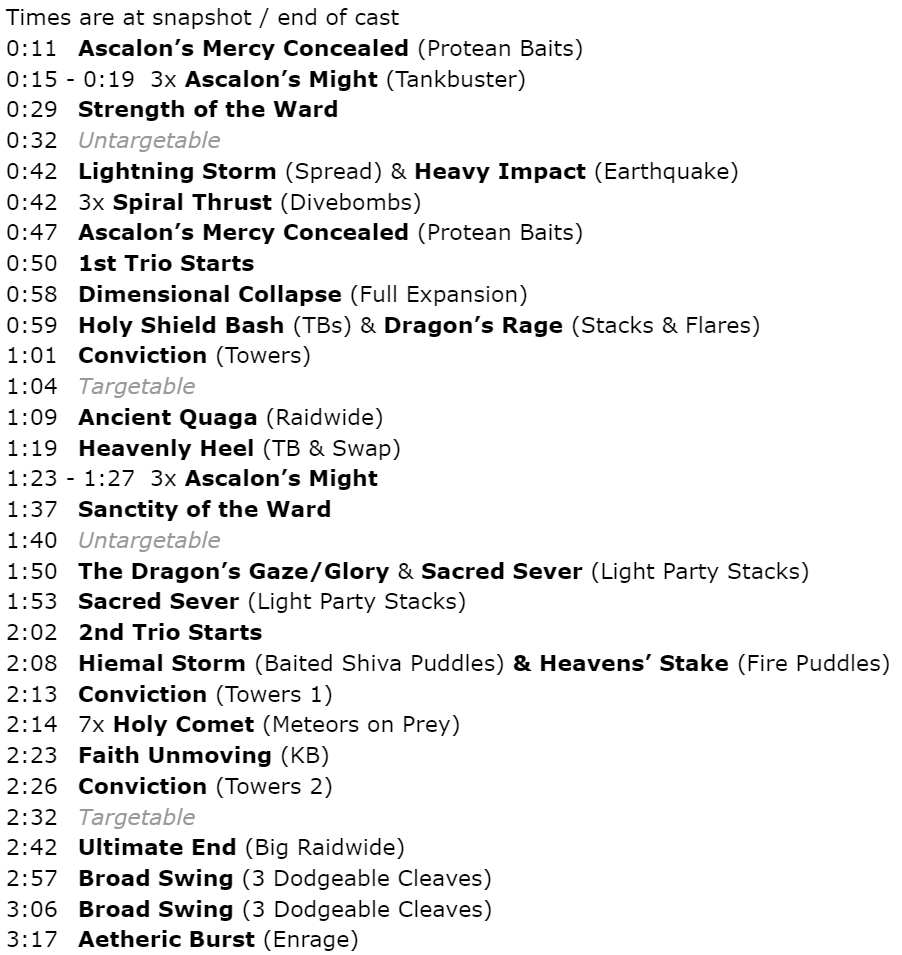 Stack both bosses together in the middle with the party at south and at max melee.

A simple raidwide. Need to just mitigate and shield through this.

If the tethered tank is finding it difficult to grab the tether, they can pull Adelphel slightly north of Grinnaux to increase the tether distance from the party. Just keep in mind the size of the Empty Dimension donut.

Once the first set is done, the unmarked players will then be marked and do the same thing on their side and vice versa.

Since the DPS check for this phase is quite lenient, for prog reasons and for consistency, try to always place yourself right on the marker to ensure the lines don’t stray too far from the corners. 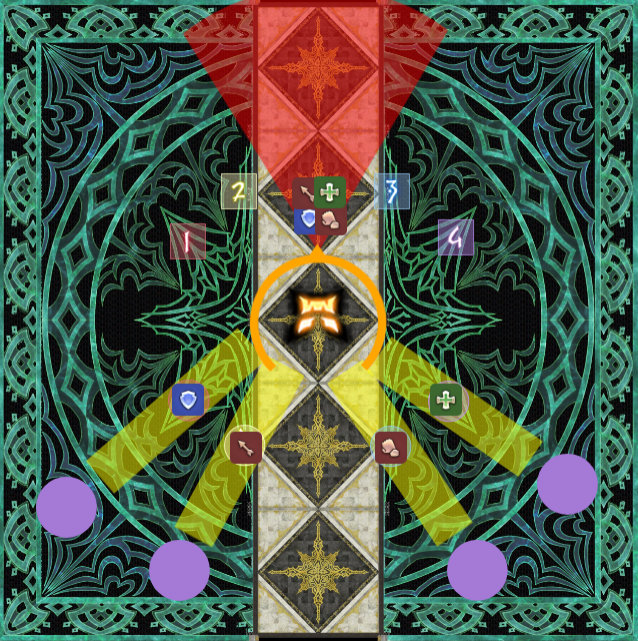 Above is an example for Hyperdimensional Slash.

Identify the cardinal direction Ser Adelphel is, move opposite of him and pop knockback resistance. Ser Adelphel will cast a Holiest of Holy raidwide and begin dashing. The raidwide may catch people off guard, so remember to mitigate this as needed when getting into your initial positions.

Once he does his first dash either clockwise or counter-clockwise, move toward the arrow on the arena in the direction of his first dash and remain there until the mechanic resolves. It should be safe through all of the dashes and orb explosions; just be careful of your distance to the portals that you dropped previously.

The tank with enmity on Adelphel will then need to move out of the party since he will finish the dashes with Execution, a heavy hitting tankbuster with a small AoE that knocks back anyone else that’s hit. The Adelphel tank can just continue their movement past the arrows into where the orbs have finished exploding and heavily mitigate or invuln this hit.

The person with the first interrupt should then prepare for when Adelphel becomes targetable while the tanks recenter the bosses for the next mechanic. 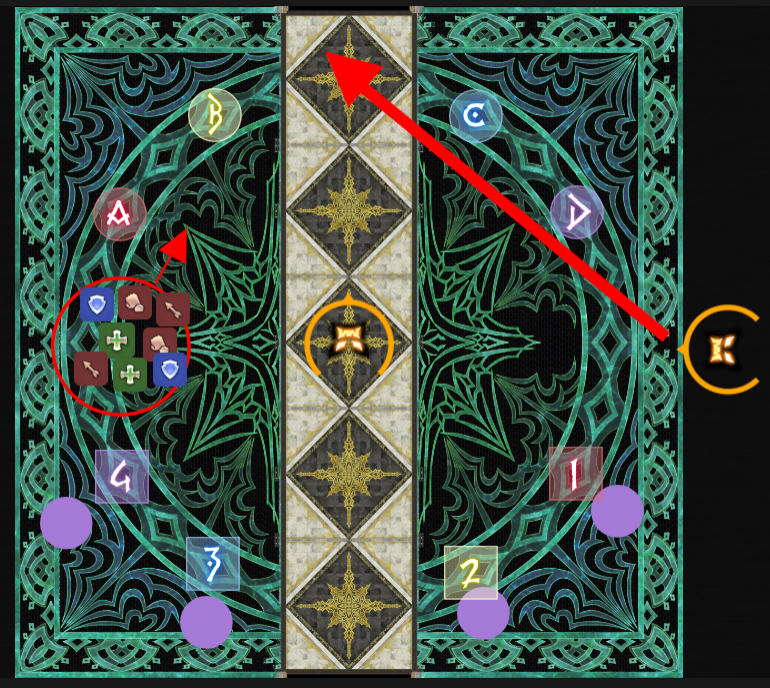 A visual example of the Holiest of Holy 2 safe spot. 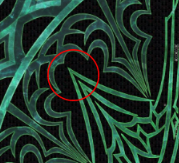 The exact tip of this arrow is always safe.

The first of the heals that come from Ser Adelphel; three of these will happen throughout P1 and must be interrupted, so plan out the order of interrupts and call them out if necessary. The DPS check will be impossible if even one of these goes off.

Knockback into Chains and individual AoEs. There will be four random pairs of symbols above each person’s head. Start close to Grinnaux and opposite of your paired partner and get knocked back, then run slightly to the edge to ensure that your chains break and you’re not clipping anyone with the resulting spread AoE.

Boss positioning can drastically offset player positions and skew the knockback portion of this mechanic. To mitigate this, make sure you’re targeting Ser Grinnaux and position yourself based on his hitbox. Additionally, the knockback not being enough distance to break the chains may catch people off guard.

If people are dead before symbols are assigned, the extra symbol from the respective role will be randomly distributed to one of the remaining players.

DPS will get: two circles, one triangle, and one square.

Tanks will get: one square, one cross

Healers will get: one triangle, one cross 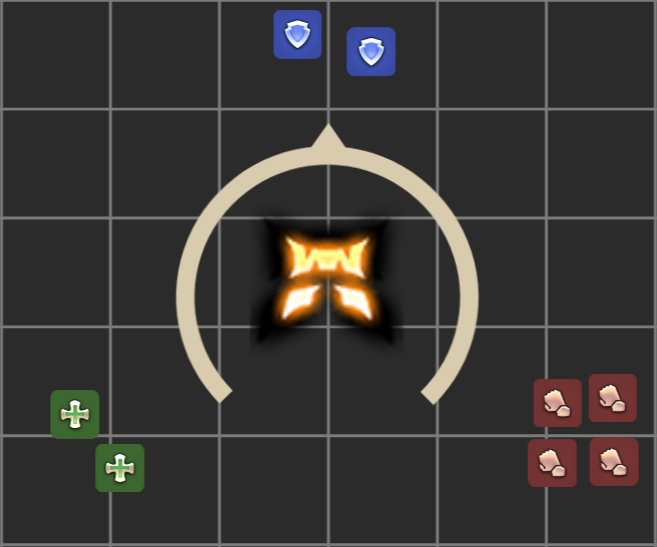 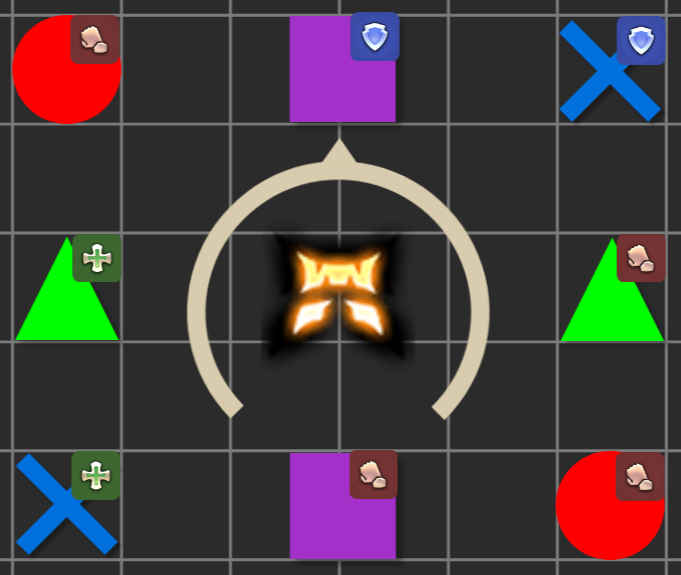 Note: If you’re a warrior, your Inner Release comes up at around this time so either delay it, use it pre-pull, or click off the knockback resistance portion. You can create a macro with /statusoff “Inner Strength” to help with this.

The second Holiest Hallowing cast, just be sure to target Adelphel and interrupt this if it’s your responsibility.

Additionally, your healers may not have as many resources here, so plan mits as needed.

Last holiest hallowing cast, interrupt based on how you assigned them. Should be noted that whomever interrupted the first can interrupt this one.

Another raidwide, heal through this and mitigate as needed.

Soft enrages cast by both Grinnaux and Adelphel. This cast is relatively quick so make sure they’re both at the same percentage before you burn them down.

Once Adelphel and Grinnaux hit zero HP, Grinnaux chains everyone in a small circle and Charibert begins his cast. Leaving the circle kills you instantly, so try not to leave it.

Charibert will protean cleave two of the closest players to him, applying a five second Skyblind debuff, which will drop a Twister at the player’s current location after falling off. Determine your order, have the players bait, move out and drop their Twister, then move back into the party and repeat until Charibert is brought low enough for the phase transition (below 30%). There’s a raidwide at the end before the transition, so make sure people aren’t completely low. Don’t forget about the last set of twisters. 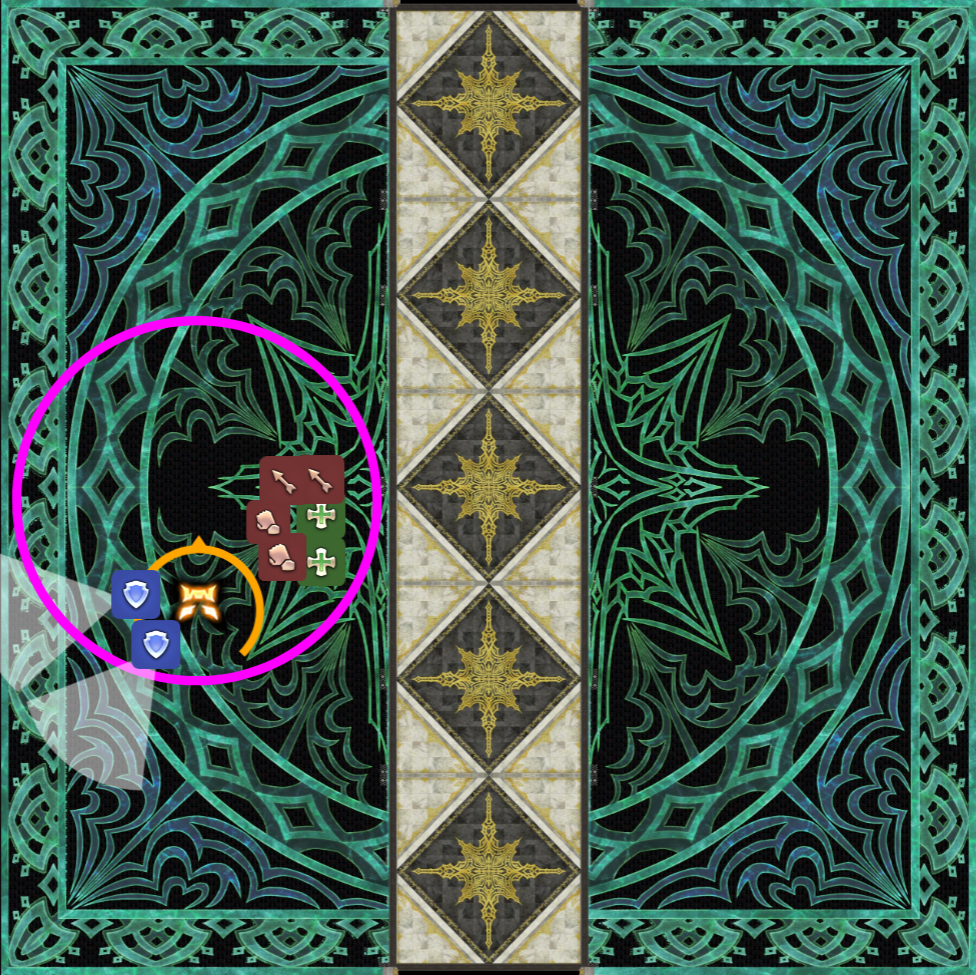 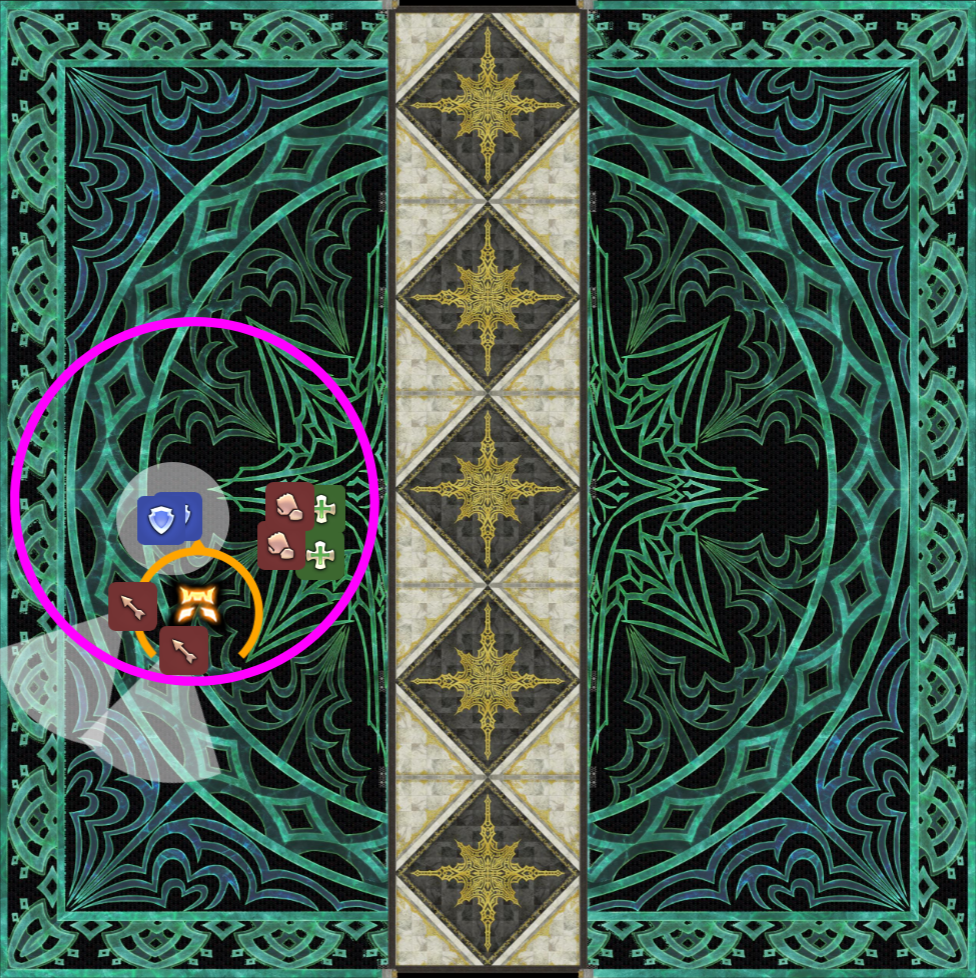 Tanks drop their Twisters on opposite side at max melee once debuffs fall off, ranged move into place. 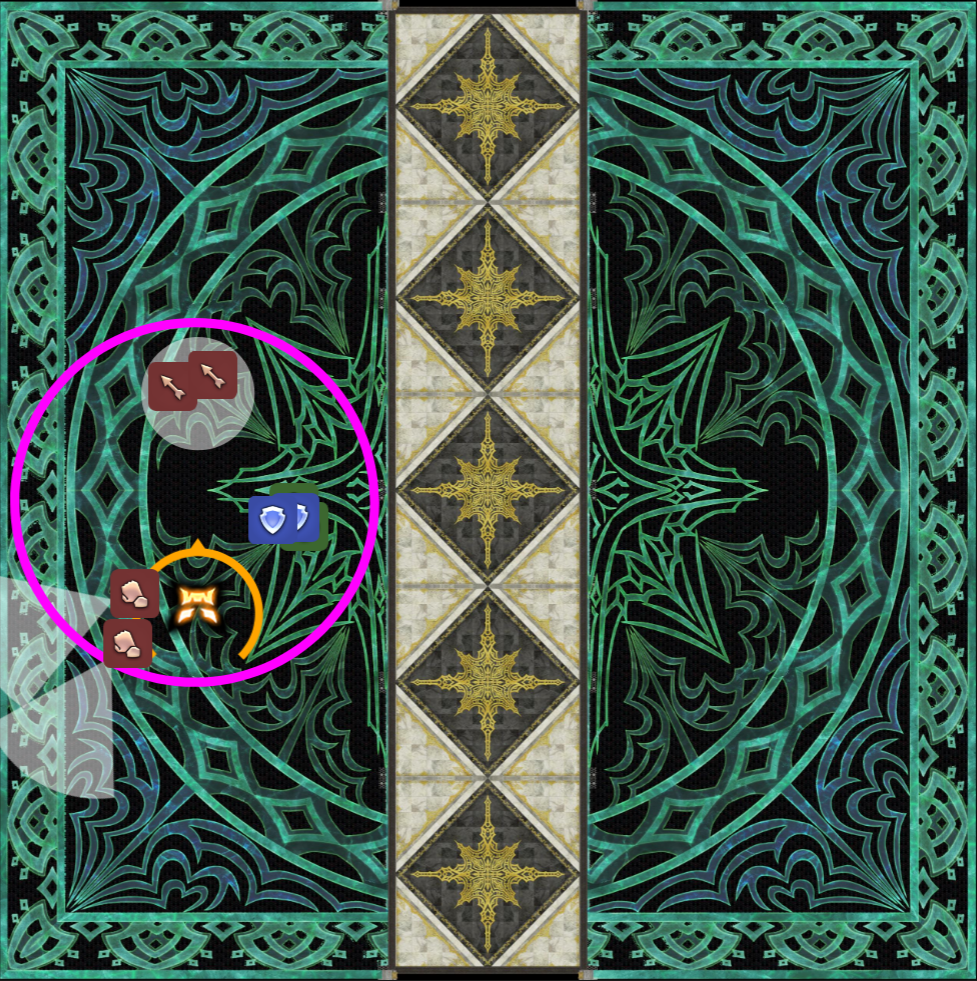 Ranged move to the back to drop off their Twister while melee move in to bait their Proteans. 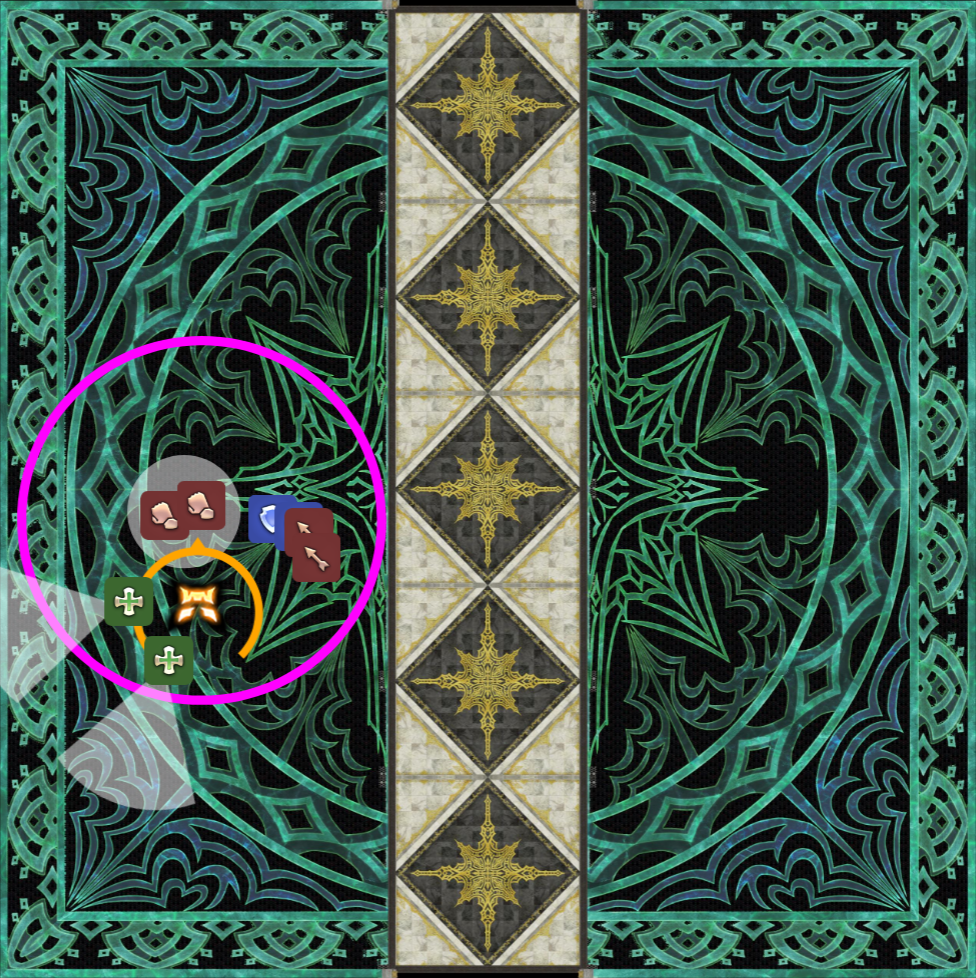 Melee move to the side max melee and drop off their Twister while healers move in to bait their Proteans.