Welcome to our Basic Guide for Summoners! This page is written to provide an introduction to Summoner at Level 80. With Summoner’s well known reputation for being a “complex” job for new players to pick up and understand, our goal is to provide a condensed and easy-to-understand guideline for how the job functions at max level, while breaking down everything into simplified priority lists that can be followed. We hope this guide proves helpful to accomplishing this goal, and wish you the best of luck with your Summoner journey!

Summoner is an interesting job within the world of Final Fantasy XIV. Combining the use of elemental egis and demi-primals, alongside an abundance of ability cooldowns and DoT spells, Summoner offers a unique game play experience within the DPS role. Along with its powerful pet and oGCD abilities, Summoner also keeps its ties with the Arcanist tree intact, bringing a few supportive abilities that are shared with Scholar.

Due to this unique combination of Summoner’s kit, the job’s rotation can be best explained as a collection of moving parts and “short phases.” While most jobs generally have one way of attacking enemies, Summoner consistently juggles between three distinct components:

Alongside these three components, the rotation structure can be broken down into these distinct phases:

At first glance, we know this will appear overwhelming. Our goal is to try and break these components and phases down into simple to follow priority lists and provide a fundamental understanding to how these various components function within the overall rotation structure.

At any given time during your rotation, your damage dealt will originate from three sources simultaneously. The most common source of your damage will be GCDs & oGCDs, as with any other job. The key difference with Summoner however, is that you have many high potency oGCDs to work with, that function as the “primary” source of your burst damage output, while your GCDs are considerably weaker and act as “filler” spells.

To make life simple while you’re getting comfortable with the job, you can follow these simple priorities for GCD and oGCD usage:

The second source of damage for Summoner originates from your damage-over-time (DoT) debuffs, from Miasma III and Bio III. While these debuffs technically originate from their corresponding GCDs, or the oGCD of Tri-disaster, the duration of your DoTs become another component that you must be aware of, to ensure you maintain as much uptime with these debuffs as you can.

An easy to follow method for getting comfortable with handling your DoT durations is to try and just focus on their 30 second durations. Once you apply a set of DoT debuffs, you can use the next 30 seconds to just focus on other things, and just keep an eye on when you notice the timers on the debuffs approaching ~3-4 seconds remaining. At this point, you can begin the process of refreshing your debuff DoTs.

Your third source of damage as a Summoner originates from your pets. While some of your pet actions, like those tied to Egi Assaults and Enkindles, are based on GCD or oGCD commands, your pets will primarily be providing auto-attacks from their own input. These auto-attacks are generally automatic, with the exception of Demi-Bahamut and Demi-Phoenix, which proc based on each GCD cast that is resolved.

There really isn’t anything special you need to do with regard to your Egis. Your Egis will continuously auto-attack, so long as they are within attack range to do so. So the only thing you really need to be mindful of is ensuring your Ifrit or Titan are within melee range or your Garuda is within casting range as much as possible.

Summoner’s rotation functions as a sort of “collection” of various mini-phases. Each of these mini-phases corresponds to a specific pet summon or trance that may be used, which provides some unique interactions, as well as the in-between phases when cooldowns are not available.

While this may appear to be overwhelming at first glance, each of these distinct phases can be simplified into easy-to-follow priority lists while starting out.

This effect will guarantee you instant-cast GCDs throughout the duration of your Dreadwyrm Trance. Instant-cast GCDs are great to use for movement purposes (for example, dodging AoEs), as well as providing additional weaving space to use your oGCDs (Enkindle, Energy Drain, Fester/Painflare, etc.).

2. Resets the cooldown of Tri-Disaster

If you don’t need to use the extra instant-cast GCDs, you may use Deathflare to finish Dreadwyrm Trance early.

During each Bahamut window, you want to aim to get two Akh Morn casts off and as close to eight Wyrmwaves as you can. Remember to use appropriate oGCD weaving GCDs (Ruin IV and Ruin II) when weaving Akh Morn or other oGCDs to avoid unnecessary GCD clipping.

Along with using instant-cast GCDs to handle your Enkindle Bahamut weaves, also be sure to use instant-cast GCDs if your Bahamut has five seconds or less remaining. This will ensure the final Wyrmwave procs will resolve in time.

Your Firebird Trance (FBT) phase will be available after the 55 second shared cooldown is finished, as well as completing your Bahamut Phase. Firebird Trance will combine both the Trance and Demi Summon, while also providing a unique GCD combo to use during its duration. Your Firebird Trance Phase will have a 20 second duration and provide the following effects:

These first two effects are the same effects provided by Dreadwyrm Trance, however Firebird Trance also grants an additional effect:

As previously mentioned, unlike Dreadwyrm Trance, Firebird Trance combines both the Demi Summon and Trance effects together. Demi-Phoenix has the EXACT same function as Demi-Bahamut:

Demi-Phoenix will have the exact same priorities as your Bahamut Phase, aiming for two Revelation casts, and as close to eight Scarlet Flame casts during each Firebird Trance duration.

While you’re waiting for your next Trance to become available, this window is called the Filler Phase. Filler Phases are when you don’t have either of your Trance durations running or Demi-Bahamut, thus your only actions are casting your GCDs, building or using Ruin IV procs, refreshing DoTs and refreshing Aetherflow Gauge. Filler phases do not generally have specific GCD sequences, but rather just follow a simple priority list. During these filler phases, your priorities are:

1. Make sure not to overcap your resources!

A. Ruin IV procs. You may hold a maximum of four Ruin IV procs at any given time, so you want to be sure to consume some of these procs before using your next set of Egi-Assault cooldowns. Casting Egi-Assaults while already holding the max number of procs will result in overwriting the proc.

B. Egi-Assaults. You may hold a maximum of 2 charges on both of your Egi-Assault actions, however you want to avoid holding both charges for any prolonged period of time. Since the cooldown timer is not present when both charges are available, holding onto both charges may lead to lost usages, which will translate into lost Ruin IV procs.

C. Aetherflow Gauge. Make sure that both charges of your Aetherflow Gauge are used before using your next Energy Drain (or Energy Siphon) cooldown to refresh your gauge.

2. If DoTs are going to fall off, AND you do not have a Tri-disaster to use soon, reapply DoTs by casting Miasma III and Bio III.

3. Use our instant-cast GCDs (Ruin IV, Egi Assaults, and Ruin II) for movement when we need to.

4. Keep casting Ruin III whenever you can.

Once you understand an overview on how each of these mini phases function, you can then begin to build it all together into executing a more fluid rotation. With a full Summoner rotation, you should see a total of five phases in this specific order, with filler phases occurring twice following your Demi-Bahamut and Demi-Phoenix windows:

Once your second filler phase is completed, you will have your next Dreadwyrm Trance ready to go, and the rotation will loop back to its original starting point. Your primary goal by this point is to perform this rotation consecutively. With enough practice, you should begin to see a seamless transition between each rotation loop you perform.

One of the core components to Summoner game play is its capability around dealing AoE damage to nearby targets. Summoner is a bit unique in that it has access to a variety of different AoE abilities, which may appear overwhelming at first glance. Rest assured, we can also provide an easy to follow list on how you should utilize these abilities. 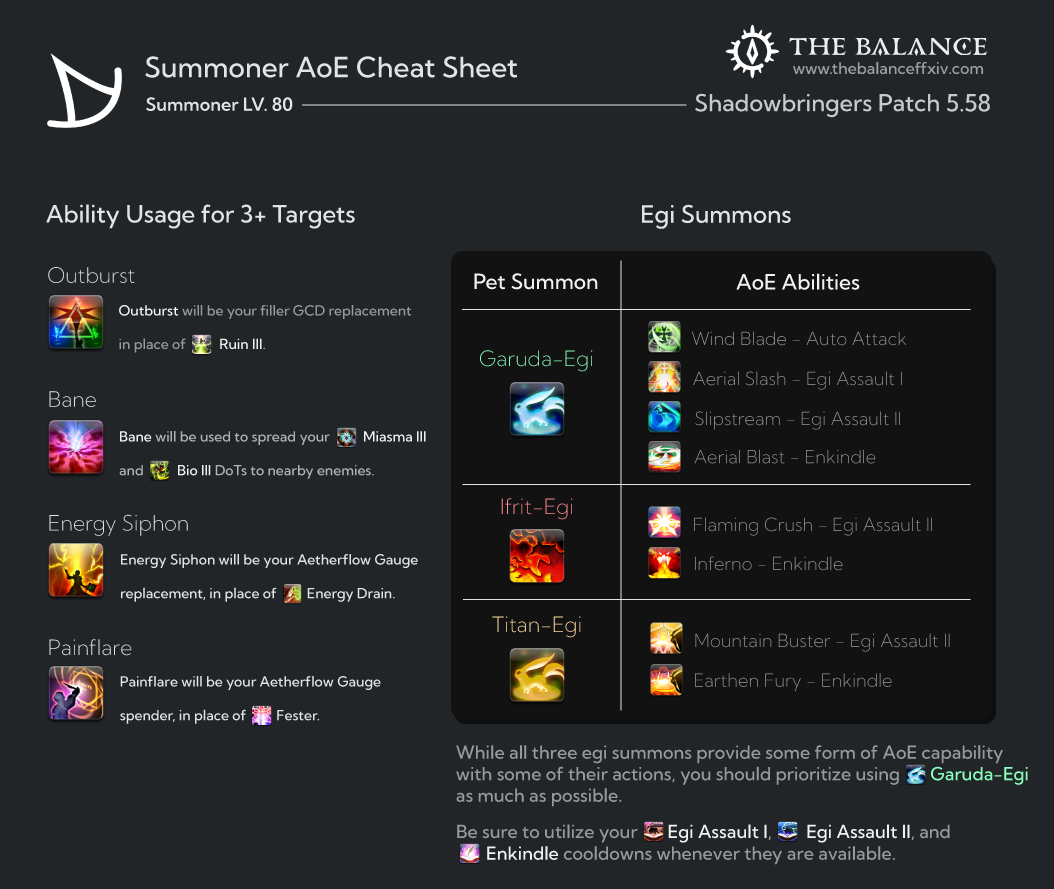 Along with the above priority image, be sure that you’re utilizing your Demi-Summon and Trance-specific abilities whenever available. Actions such as Deathflare, Enkindle Bahamut, Enkindle Phoenix, and Brand of Purgatory provide strong incidental cleave to nearby targets, so keep this in mind whenever you have your Dreadwyrm Trance, Demi-Bahamut, or Demi-Phoenix available when fighting multiple targets.

Along with its prolonged rotation loop, Summoner also brings a strong utility kit. This kit features an array of offensive and defensive spells, allowing you to not only buff your party members' damage, but also provide yourself with survivability, as well as the ability to raise downed party members.

With thanks to AkhMorning for assistance with resources and theorycrafting.