This is the Basic Guide for Astrologian. This will cover enough ground to get you started with AST, being able to handle this relatively high-input job in content at level 90. It is intended to be well-suited for any player, and if you take the advice and techniques from this guide you should be able to handle yourself well-enough in endgame content.

As this guide is relatively basic and does not go into any of the complexities of Astrologian, there will, of course, be gaps of knowledge, and some aspects of this fairly high-intensity job will be glossed over. That is okay, the skills here will still be foundational and fundamental, and a player can use these tools to advance their own gameplay.

How the Job Plays

Astrologian is a pure healer. This means the job’s healing capabilities are focused on strong GCD heals with Heal over Times (HoTs) attached, and a simple Damage Over Time (DoT)-nuke rotation for DPS. Unlike its counterpart, AST is not a job balanced around forced GCD healing, and has a litany of oGCDs to supplement its kit. As such, your main focus as you play will actually be using your oGCDs primarily to cover as much healing as possible.

Astrologian has an important ability called Earthly Star. You will want to be getting as many uses of this ability as you can. It should form the backbone of your healing plan in a fight.

As a Caster (yes, Caster) in FFXIV, your main goal is to maintain as high an uptime as possible. A vast majority of your spells should consist of Fall Malefic, with keeping as close to 100% Combust uptime as you can. Good play is going to mainly come from this uptime discipline.

Good play of cards is going to prevent Draw from sitting at two charges, using Divination on the opener and off cooldown afterward (unless the encounter has no targetable enemies when it comes back up), and getting a two-Seal Astrodyne to line up with Divination. We will talk a little more about cards later.

Astrologian has a wealth of mana refresh at its disposal, giving it by far and away the strongest mana economy in the healer role. You can expect to be able to recover a rough situation without much worry about the possible bottleneck of MP. Active use of Astrodyne, and consistent use of Lucid Dreaming will ensure you are almost never for want of more mana.

Astrologian has three main resources to observe on the job gauge:

You can see these resources in the picture below: 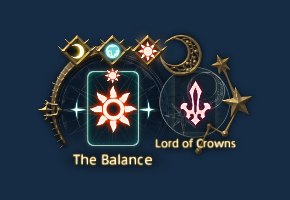 Using as many ‘Cards’ in a fight as you can is crucial to good AST play.

Before discussing anything else, I believe it is most important to establish some foundations for how to use your cards on Astrologian. Again, there are obviously a ton of nuances to this, and we are going to just get you started for now.

Cards have three core fundamentals to begin with:

It may be quite tempting to use cards as soon as you acquire them. However, this is not the correct way to play Astrologian. The main resource that cards give us is access to Astrodyne, in tandem to a buff to one teammate at a time. Thanks to the way cooldowns line up, you want to use a 3-1-3 rotation on cards, as follows:

To do this, you will execute Draw and sit on a card until it is time to play it. It is okay, let the Draw cooldown tick. You will not overcap and lose uses of cards if you follow the above. This will give you most of your cards and Astrodyne to line up with Divination and other raid buffs.

We make this effort because this will line up our cards and Astrodyne personal buff with everyone else’s strong raid buffs (alongside our own Divination). Buffs are multiplicative in this game, so as many buffs as we can stack at once, the better. Additionally, this will line up our cards with the significant peaks of everyone else’s burst damage.

Additionally, you will execute Minor Arcana every minute, and try to hold Lord of Crowns (if you get it) until the 2m raid burst sequence, alongside Divination. It is okay if this is too much work to start, and you use your Lord right away. Just work towards this as you can.

Use the following graphic to see how your overall card rotation will thus play out:

(This is a huge graphic, so digest it as you can. The timeline at the top is most important.) 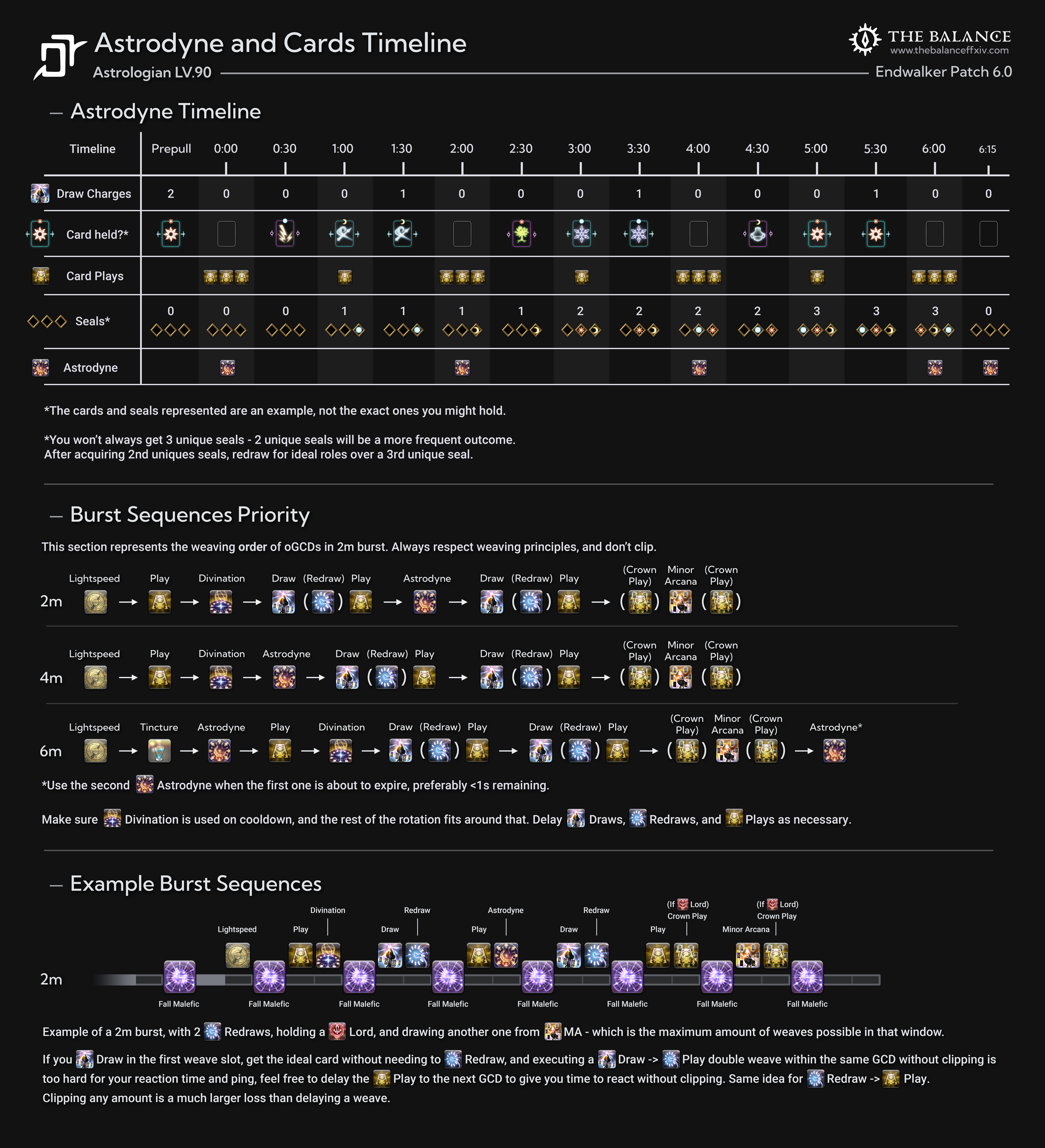 Additionally, use the following cheat sheet to review carding fundamentals, and some tips and tricks on how to use them: 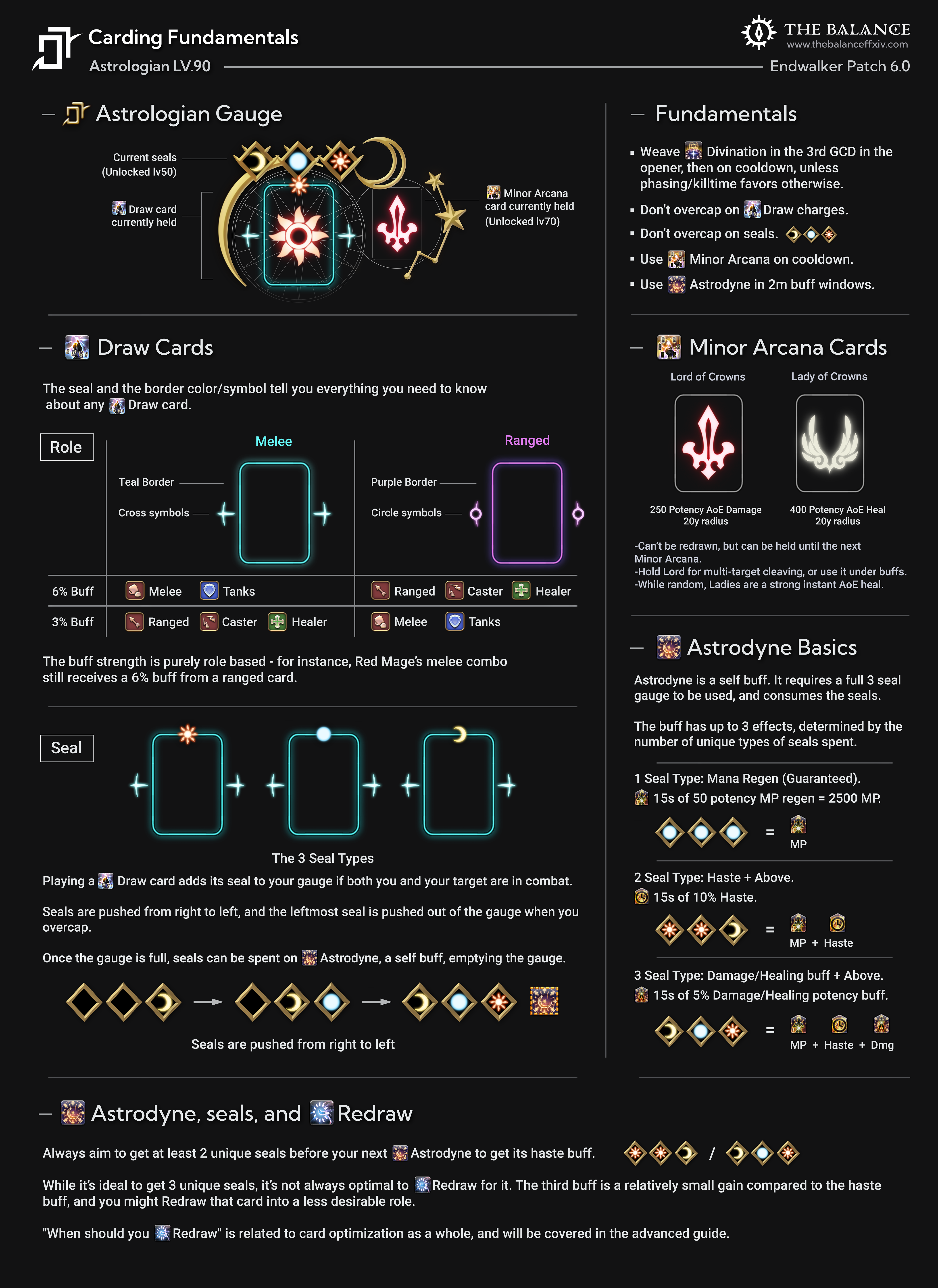 The base Astrologian opener is as follows: 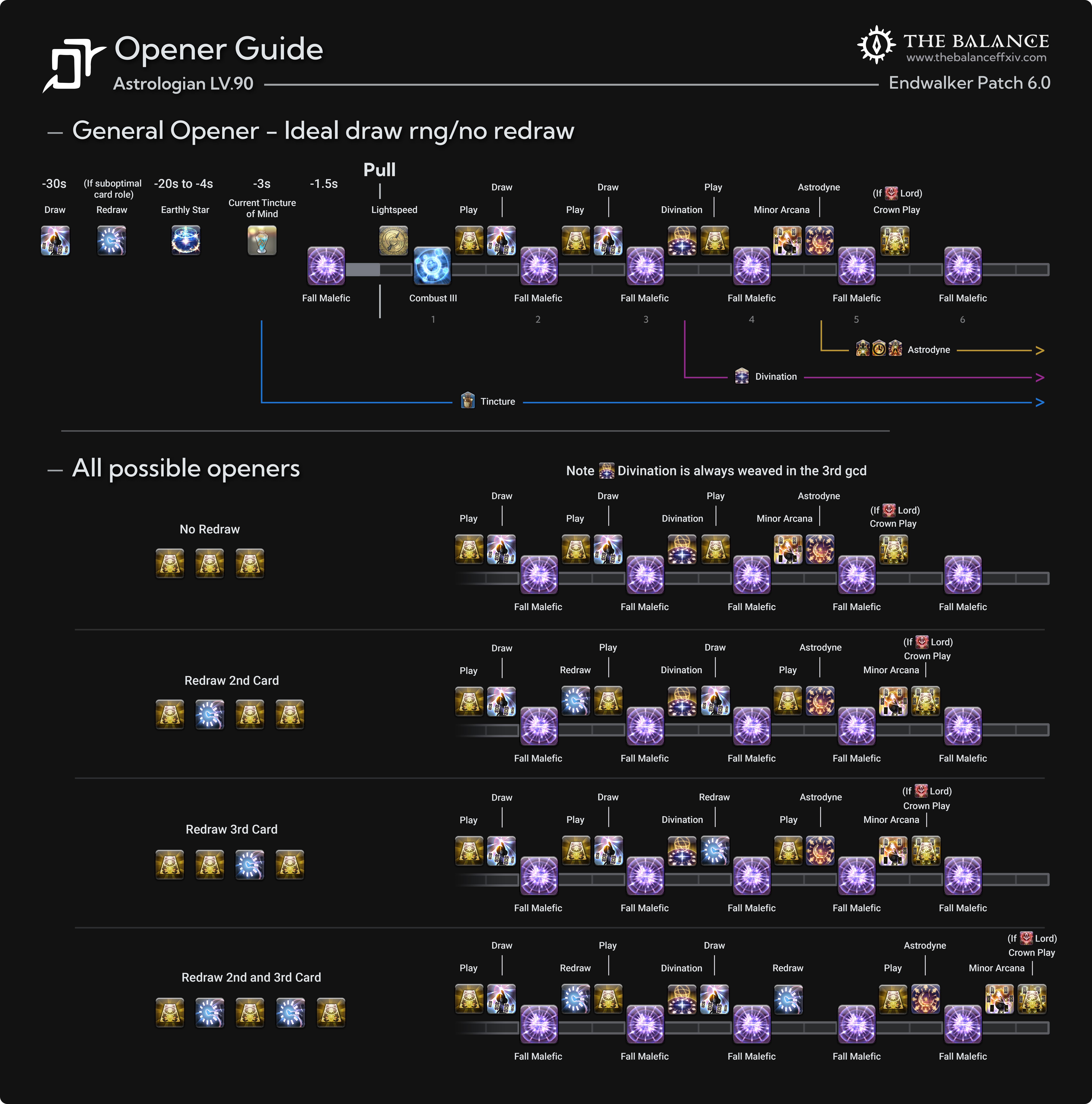 That is a large graphic, but a majority of it is just to show every possible opener because of Redraw. Reminder, you are aiming for a two-Seal Astrodyne, and as many melee cards as possible.

If you would like to see a general priority list for which jobs to card, there is one provided in the #ast_resources section of The Balance. Once we have a proper graphic constructed to represent this, you will also find this graphic here.

Healing and Other Utility

Rescue allows you to pull an ally to your side, but due to its long cooldown and slight delay on activation, it is relatively hard to use.