How do Raiden Thrust and Draconian Fury work?

Short answer is no. You should – in general – always be pressing all three of your buff actions (and every other damage-dealing action) as close to on cooldown as possible. The Opener aims for optimal buff placement for the party without messing our own rotation up.

The only exception to this rule is a situation where you are running with a static, consistent team and have a specific kill time in mind. In this sort of coordinated environment (and only in this case) it can be prudent to shift your buff times to line up with allies for net gains to raid DPS. This is a very niche case and most of the time should not be taken into consideration.

Who should I tether with Dragon Sight? 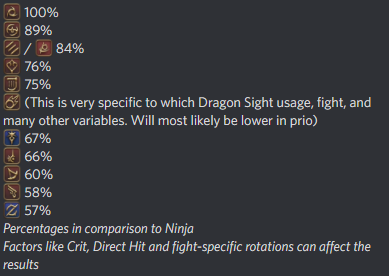 In a static group, on initial pulls of the fight while learning, prioritize in the same way as above. After you have a few pulls, filter a series of FFLogs parses from your group through https:///tethercalc.com/ to get specific answers for each tether for your particular group on that particular fight.

In general, no. You should be pressing everything as soon as it comes up.

Spineshatter Dive is an exception now with its two charges. You can freely hold the action as long as you don’t cap out both charges.

However, if you know your target kill time and are certain that the delays will not cost a use on the fight, then it is perfectly acceptable to do so. Just be aware that delaying is never worth it if you end up with one fewer cast on the encounter because of it, especially in the case of High Jump and Mirage Dive.

What does delaying Life of the Dragon mean?

With a 60s recast on Lance Charge we will ideally delay every life window. The arrangement of Geirskogul and High Jump in the Opener remains this way forever, with every odd one landing immediately after Lance Charge or Lance Charge, Dragon Sight and Battle Litany and entering Life.

Specific fights may not allow a delayed life due to unfortunate phase timings. We have to adapt the (Re-)Opener in that case and use Mirage Dive before Geirskogul to enter life right away. This also applies to the last life in a fight. Do not lose out on Nastrond or Stardiver casts by delaying a life when the boss is about to die!

Should I double up Chaos Thrust on two targets? What about three?

The short answer is yes - if you have two targets that will both be active for > 30 seconds, you want to alternate targets, maintaining Chaos Thrust on both:

If any Life Surge comes up in these scenarios, just use it on a Fang and Claw that has a positional hit, as it has no effect on the damage-over-time effect of Chaos Thrust. This rotation has approximately a 3% gain over the usual rotation if you have two targets to spread Chaotic Spring on.

When extending to three targets, if they’re all within range, you actually want to swap to your AoE rotation (Draconian Fury / Sonic Thrust / Coerthan Torment) and use Life Surge on Coerthan Torment.