Hello, Monks. Welcome to the encounter guide for the first tier of Endwalker.

We will review the different ways on what is possible to optimize from the entirety of the tier.

Nothing much to say, this is a dummy fight; do the optimal drift rotation for max damage.

Make sure you and the group are as central as possible during Intemperance One and Intemperance Two to ensure you’re going to hit everyone. If this still doesn’t work, you do have the following option, which consists of holding your Brotherhood (BH) if you aren’t sure to hit everyone and use it once you do the in/out mechanics. Note that if you hold it too long you may lose a use depending on the killtime.﻿

What is special about P2S is the potential for Limit Cut downtime to be handled incorrectly by holding to 4:30, making us lose Riddle of Fires (RoFs), BHs, and Perfect Balances (PBs) depending on kill time.

The early opener is simple; you open with Twin Snakes and do the rotation like it was Lunar Solar (Opos will be switched).

It allows us to burst before Limit Cut with your team (they have to do it too) and win a use of Brotherhood if the killtimes allows it, while ensuring no PBs are lost.

Due to the numbers of downtime on this fight, we will have an early PB in the opener, making us doing Solar Lunar. Either you follow it like a Double Solar opener, but with a Lunar Nadi for second Blitz, or you have the Peepo Smilers(tm) opener you can see under making us gain one Opo:

By doing early PB, this will allow us to get one more PB in the three-minute window, which is juicy.

How does it work?

We Solar Lunar opener, then can early clip Demolish (Demo) at the two-minute, leading to a Lunar Solar burst. For the sake of alignment for Limit Cut, you can follow the usual rotation after this.

At the 3m marks (first arrow), you have to delay RoF for after the mechanic, else you won’t be able to do Double Blitz on a three minute burst, which is the point of our Solar Lunar opener.

For the three minute window you do the usual stuff:

This will push Phantom into the even-minute bursts and you will even win a use of PR if you kill at eight minutes.

The four minute burst is a refresh buffs into Elixir Field, into refreshing buffs in the Phantom Rush PB.

You can then go back to Lunar PB in odd minute windows and RP > PR in the six minute burst, then it repeats until the boss is dead.

The rotation is in principle the same as Solar Lunar opener, as it allows us to gain a use of PB and lose a use of RoF + BH based on killtime.

It’s how Monk can drift rof/bh without losing uses of PBs. You can’t do the drift in one big motion due to the 40s CD of PB, so we have to split it into two. Ideally the group is aware of the strange alignment, so it will definitely be hard in Party Finder (PF) groups.

You do a re-opener after the first Arrow and play it like a RoF + BH Two, so Phantom Rush into refresh buff and then Elixir Field.

After Limit Cut you can re-opener again and do another three GCDs sequence before RoF delaying it by another 20s again (Told you it’s a dangerous rotation to take in hands)and do RP into PR.

You can check how it works in the links below:

For this fight you will prepot -5s and do Lunar Solar opener as it’s more damage over Double Solar (two minute encounter for Double Solar = Vomits everywhere).

We have two choices:

Double Lunar Rotation for All Pre-Adds:

Double Lunar rotation is used in this fight for the sweet one minute burst being a Rising Phoenix, it will be aligned for the orbs, so you will simply press Rising Phoenix and hit the boss, plus both orbs, which optimize the damage dealt to both.

RoF is weaved late because like all the Double Lunar we play it as a RoF + BH Two window, this will allow us to refresh buffs between both Blitz.

For the two minutes, you play it like how I explained it in the next section: Optimal Drift into Double Lunar

The two minute burst window will be different than usual. Firstly, due to the adds not being included in the log, you can hold your Riddle of Wind for the two minute window.

Then, for the sake of the Triple Blitz after adds, you want to Double Lunar on your two minute. It’s pretty simple to do – you will have to Twin and overwrite Demo by one sequence, and then do a RoF + BH Two with only Lunars.

So it means delaying your RoF for post PB (still use BH on CD):

Something very important is killing the big adds as slow as possible, else what follows is our rotation being fucked up for bursts which is less than ideal.

Note that the pre-potion -5s should allow you to pot before doing your first Blitz on the reopener, which is a lot of damage since we do three Blitz.

I will quote Perfect Balance guides for this section as it’s easily understandable:

“Triple Blitz windows are reliant on long periods of downtime in order to leverage the 20-second durations of both Perfect Balance + Masterful Blitz in order to charge up a Blitz, then hold it into your next Riddle of Fire where the 40 second cooldown of Perfect Balance will have refreshed, allowing for an additional Blitz in an Even Riddle of Fire window at no cost. This is doable due to the fact that AoE skills will grant a Beast chakra even if they don’t hit a target.

As you are beginning with a Nadi already, you are relatively locked in as to how the rest of the window is sequenced.

Key things to keep in mind regardless of which route you choose to follow when attempting a Triple Blitz is that it starts quite late relative to other jobs reopeners. As such you might have to modify your burst to better catch your groups timings and to have the ability to place Brotherhood in a better spot for your team."

For P3S it will be at the same moment you press RoF, four GCDs after. See the sheet below: 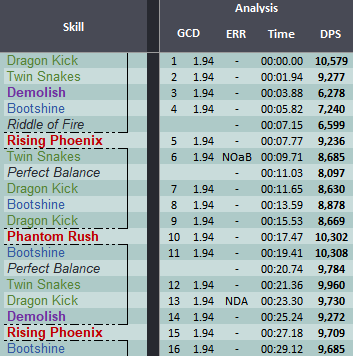 After that, it’s basic rotation until the boss dies, or enrage hits.

Hesperos, like most of the others, is mostly a full-uptime boss (if you do the uptime strat), so there’s nothing much to say.

If you are killing before six minutes and care about parsing, you can do the ol’ 0/3/5 bursts windows. It’s really simple to do, instead of doing Solar/Lunar in the two minutes, you will just do a back to back single Elixir Field, and wait for the three minute marks to unleash your bursts.

As I said, the uptime strat is for Thunder Pinax using Thunderclap. How it works is basically keep attacking the boss until the Thunder makes a flash – you then can use one GCD before Thunderclapping to someone in safe spot, then Thunderclap back and you won’t die to Thunder.

What comes next is either Sword or Cape. If Sword, you Thunderclap back to an ally after gap closing to the boss; if it’s Cape, you stay on the boss and cancel the knockback with Thunderclap.

This boss is a full uptime scenario too.

Act Two can be handled at max melee range, though you might have to get out for roughly one GCD to pop your tether. For Act Four, some inconsistencies like getting purple tethers can make you want to call it a day.

That is all you have to know about this fight!

And this is it, thank you for reading the whole encounter guide for the first tier of Endwalker!

Thank you to The Balance for giving me the chance to contribute to the well being of monk guides.