This guide was written by Akashi Seraph for players who are seeking to, or are currently leveling Ninja. The guide aims to inform players about how to initially play as Ninja, what gear they should use while they level and where to find it, the key basics of the job, as well as some example openers for lower levels. If you are already a level 90 Ninja and are looking for information pertaining to the job at level 90, please see the Basic Ninja Guide.

Rogue, which later evolves into Ninja, is a melee DPS role, which focuses on dealing a large percentage of their damage within a burst window. This burst window begins once Trick Attack is applied to the boss, increasing your damage dealt by 10% for 15 seconds. Once you obtain your job stone at level 30 after completing the quest “Peasants by Day, Ninjas by Night”, you will learn your first ‘mudra’. Mudras are hand signs that Ninjas use in sequences to cast a wide array of attacks that will become one of the core parts of your rotation as you level.

How to Become a Ninja

Unfortunately you cannot start the game as a Rogue/Ninja, so if you’re dedicated to playing as a Ninja throughout your Main Story Question journey then you’ll want to start the game as either an Arcanist or a Marauder. Both of these classes start in the city of Limsa Lominsa, which is also where you can pick up Rogue. Once you get either of these classes to level 10 and complete the associated class quests up to that level, you can then pick up the first quest to unlock Rogue from Lonwoerd in the Limsa Lominsa Lower Decks (x:8.1, y:16.1).

Rogue/Ninja currently has its own unique subclass of gear, called Scouting. However, Ninja uses Aiming accessories, as Scouting accessories do not exist.

Generally the gear you receive from the MSQ and dungeons is substantial enough to ensure you’re not undergeared until you reach level 50.

Level 50:
Once you hit level 50 you can purchase iLevel 130 Augmented Ironworks gear from Auriana in Mor Dhona (x:22, y:6) using Allagan Tomestones of Poetics. A full set will set you back around 4,000 poetics and will last you until level 60, though level 54 gear and beyond will have a higher iLevel.

Level 60:
From level 60 you can purchase iLevel 270 Augmented Shire gear from Hismena in Idyllshire (x:5.6, y:5.2) using Allagan Tomestones of Poetics. A full set should cost you the same as a full set of Augmented Ironworks gear. Similar to Ironworks gear, this will last you until level 70 but is outscaled by gear for level 64 and beyond.

Level 70:
From level 70 you can purchase iLevel 400 Augmented Scaevan gear from Eschina in Rhalgr’s Reach (x:13.8, y:11.8) using Allagan Tomestones of Poetics. A full set should, once again, cost you around 4,000 Tomestones and last you all the way to 80 unless you replace it with level 74 or higher pieces. Shadowbringers MSQ will give you gear coffers as you progress through it.

Level 89
Once you reach level 89, and have progressed through the MSQ far enough, you can obtain iLevel 560 Artifact Armor from Varsarudh in Old Sharlayan (x:11.8, y:9.9).

Ninja currently follows the stat priority of: Weapon Damage »> Dexterity »> Critical Hit > Determination > Direct Hit, while avoiding Skill Speed as much as possible. However, always use the highest iLevel gear you have available to you, as it will always be a DPS gain over lower iLevel alternatives with more desirable stats.

Materia can be melded following the stat priority list above. Due to the nature of gearsets frequently changing, you can find the most up to date BiS gearsets in the #nin_resources channel in the Balance discord server, or on the Ninja Best In Slot page on this website.

Firstly, do not use Doton on single-target at any level. It is a significant damage loss.

⦿ Unlocked at level 45, the Huton Gauge is an icon on your HUD in the shape of a fan that indicates the duration remaining on your Huton buff.
⦿ The Huton buff is granted by casting the Ninjutsu Huton. It decreases your GCD recast speed by 15%, changing your 2.50 seconds GCD into 2.12 seconds, and has a duration of 60 seconds. 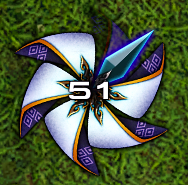 Filler is defined by our rotation in-between our primary burst window (Trick Attack once per minute, with Mug alongside it once every two minutes). Given Trick Attack is only 15s long, most of our time is spent within our filler.

Make sure between your burst windows you:

Ensure before each opener you always cast ‘Huton’ roughly 10 seconds before the pull, and use ‘Hide’ to reset your mudra stacks back to full.

Once you hit level 54 you start refreshing Huton with Armor Crush instead of manually with the Huton Ninjutsu, once the duration is less than 30 seconds.

The level 60 opener and rotation is mostly identical to the level 50 one, however Assassinate is now upgraded to Dream within a Dream.

If you drop Huton during a fight, either due to > 60s cutscene/stunned downtime or death, you can now use Huraijin to recover the full duration. However, you should still use Huton > Hide to apply Huton before combat, and not use Hurajin in any other situation.

NOTE: Due to this opener only being useful for a couple of levels, it is recommended to skip this opener and do the Level 73 - 79 opener instead, unless you plan on doing Level 70 Ultimate content such as the Unending Coil of Bahamut (Ultimate), or the Ultima Weapon’s Refrain (Ultimate).
For more information on the level 70 rotation, see the pin in the #nin_questions channel.

It is important to note that once you reach Level 76, you swap the first Raiton after Trick Attack with Hyosho Ranryu, which has the same input as Hyoton.