Gunbreaker (GNB) is the fourth tank added to Final Fantasy XIV in the Shadowbringers expansion. It features high damage output and high casts-per-minute. GNB also features a strong defensive kit that, when used properly, can bring a lot of mitigation to the table. Let’s get started with a brief overview of the skills and abilities available to GNB.

Offensive On Global Cool Down Abilities

The first skill of our basic combo. 200 potency.

The second skill of our basic combo. 300 potency when used after Keen Edge. Heals for 200 potency and gives a shield equal to the amount healed.

The final skill of our basic combo. 400 potency when used after Brutal Shell. Generates one Cartridge in the Powder Gauge.

500 potency attack that consumes one Cartridge.

450 potency attack that consumes one Cartridge. 30 second base cooldown that is reduced by skill speed (discussed later). Triggers Ready To Rip.

550 potency attack that can only be used following Gnashing Fang. Triggers Ready To Tear.

650 potency attack that can only be used following Savage Claw. Triggers Ready To Gouge.

300 potency attack that applies a 90 potency Damage over Time (DoT) for 30 seconds (900 potency total from the DoT). 60 second base cooldown that is reduced by skill speed (discussed later).

Ranged attack skill with a potency of 150 and a range of 15y.

First skill of our Area of Effect (AoE) combo. 150 potency to all targets in a 5y circle centered around you.

Second skill of our AoE combo. 250 potency to all targets in a 5y circle around you when used after Demon Slice. Generates one Cartridge in the Powder Gauge.

Consumes one Cartridge. 320 potency to all targets in a 5y circle around you.

Turns into Jugular Rip, Abdomen Tear, or Eye Gouge when under the effect of Ready To Rip, Ready To Tear, or Ready To Gouge respectively.

260 potency attack. Can only be used under Ready To Rip triggered by Gnashing Fang.

280 potency attack. Can only be used under Ready To Tear triggered by Savage Claw.

300 potency attack. Can only be used under Ready To Gouge triggered by Wicked Talon.

800 potency attack with a 30 second cooldown.

200 potency attack to all targets in a 5y circle around you. Also applies a 90 potency DoT for 15s to all targets hit by the initial attack (for a total of 450 potency per target from the DoT).

200 potency attack that dashes you to the target. Has 2 charges that regenerate at a rate of 1 charge every 30 seconds. 15y range.

Defensive Off Global Cool Down Abilities

Sets your HP to 1 and makes you unable to take damage from most attacks for 8 seconds. 360 second cooldown.

Role action. Makes you immune to most knockback or draw-in effects for 6 seconds. Applies a 20% slow to enemies that attack you while Arm’s Length is active (This means enemies will attack you 20% slower, very useful for dungeons!). 120s cooldown.

Utility Off Global Cool Down Abilities

Reduces magic damage taken by 10% for self and party members in a 15y radius around you for 15 seconds. 90 second cooldown.

Role action. Reduces damage dealt by all enemies in a 5y circle around you by 10% for 10 seconds. 60 second cooldown.

Role action. Cancels a target’s cast (if it is an interruptible cast). 30 second cooldown.

Tank stance. While toggled on, applies a 10x enmity modifier to all abilities.

Role action. Puts you at the top of the enmity list and gives 2000 potency worth of additional enmity (20,000 if Royal Guard is active).

Role action. Transfers 25% of your enmity to a target party member. This effect applies to all enemies on your aggro table.

If you are unfamiliar with combo based classes in FFXIV, the game has a handy system to show you what combo skill to hit next. A dotted yellow outline will appear around the next skill in the combo. You have 15 seconds (or about 5 GCDs) to hit the next combo action before the combo deactivates (breaks). Using any other GCD ability will break combos as well, with some exceptions.

Gnashing Fang combo is our Cartridge spender combo. It does high damage and is a very important part of our burst. Note: Jugular Rip, Abdomen Tear, and Eye Gouge must be used after Gnashing Fang, Savage Claw, and Wicked Talon respectively or the buff that lets them be used will be lost.

Combos are broken when using non-combo GCDs before the combo is finished. However, there are several skills on GNB that do not interrupt combos.

Burst Strike, Fated Circle, and Sonic Break do not interrupt any combos. Lightning Shot interrupts all three of our combos.

The following images are a visual representation of the previous paragraph, made by Rin Karigani. Please note Keen Edge combo and Solid Barrel combo are two names for the same thing. 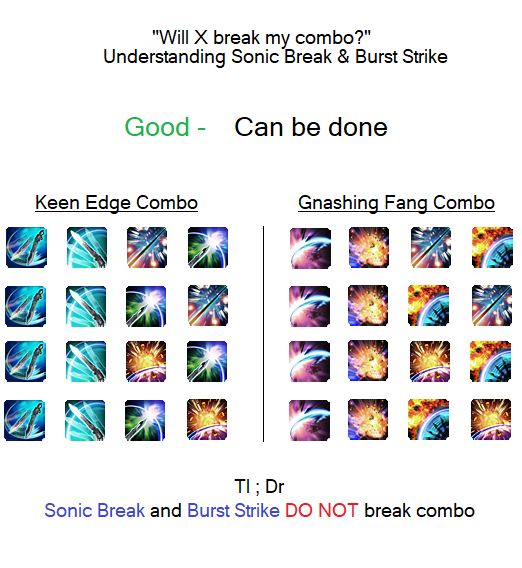 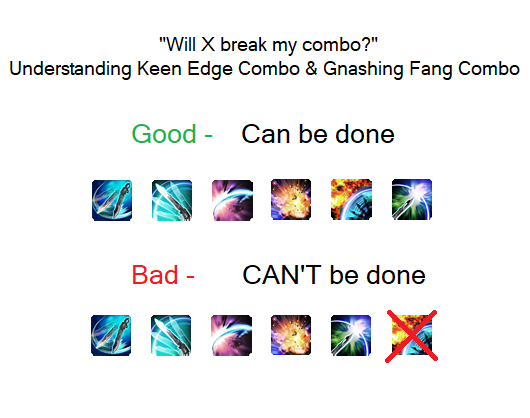 This section will only talk about AoE vs Single Target at level 80. If you are not yet level 80, please refer to the Leveling Guide for a breakdown of what you should be doing at each level bracket.

For one target present, we use Solid Barrel combo and Burst Strike. For 2+ targets: Demon Slaughter combo and Fated Circle.

Use No Mercy on cooldown regardless of how many targets you have. Whether or not Sonic Break is useful in multi-target fights will depend on how long it will be on the target as well as the number of targets. Whether or not to use it will be a case-by-case basis. At somewhere around 5+ targets, it likely will be a loss to use regardless.

Always try to enter No Mercy with two Cartridges ready when possible. At any normal skill speed, there should always be nine GCDs within the No Mercy buff. These buff windows should look similar to the opener and should always contain the following skills:

When Bloodfest is ready inside No Mercy, it creates an opportunity for a stronger burst window that will occur every three minutes, allowing for three or four Burst Strikes instead of only two. Since we get more Burst Strikes, but we can only fit nine GCDs under the buff still, we have one or two fewer Solid Barrel combo GCDs compared to a regular No Mercy window. This means the following skills are in No Mercy when Bloodfest is ready:

If you are unable to fit nine GCDs in No Mercy, make sure that you are pressing No Mercy at approximately ⅔’s of the way into the GCD clock as shown here:

Cartridges should generally not be used outside of No Mercy unless they are being used for Gnashing Fang, if you would otherwise overcap on Cartridges, or fight specific optimizations such as hitting multiple targets with Fated Circle. Doing this helps to ensure that No Mercy is entered with two Cartridges ready.

Openers are designed to do a few very important things:

The theoretical standard opener for a full-uptime encounter is the 4th GCD No Mercy opener: (Graphic by Rin Karigani)

At higher levels of gameplay, you can and should adjust your opener based on your group composition and the specifics of the fight.

Because openers will change tier-to-tier and fight-to-fight, please refer to the #gnb_resources channel in The Balance for the most up-to-date openers.

Previous GNB guides have thought of the rotation in terms of a 60s/three minute loop. In practice, the GNB rotation is much less a loop and more of a priority system. GNB is more accurately an “if X is ready, do X, else do Y” class. Therefore, after the opener the rotation priority is as follows (with one caveat, mentioned following the priority list):

Because GNB is more of a priority system than a strict rotation, the rotation is very flexible and can be adjusted to the needs of the encounter and group composition.

GCD uptime refers to pressing your weapon skills (GCDs) as soon as they are available. If there are spaces between when your GCD is ready and when you press the next one, you will lose a significant amount of damage. As such, we aim to keep our GCDs rolling as much as possible. Please note, this only refers to when an enemy is present. It is possible to achieve a minimum of 96% uptime in every fight. Anything lower than that is almost guaranteed to be caused by not playing correctly. How to increase this number around mechanics that normally seem like they should cause downtime is a fight specific optimization and will vary fight to fight. Even if you are making mistakes, it is almost always better to keep your GCD rolling than to just not do anything.

A big part of GCD uptime for GNB comes from being able to move bosses during heavy burst windows. Since the Gnashing Fang combo must be followed by Continuation, which is a melee range skill, it can make moving the boss during this window frustrating. Some common ways to alleviate this frustration are:

How you approach this will largely be personal preference as well as fight specific optimization. Do what gets the best results for you. You should also ask your co-tank if they can handle moving the boss if it makes it easier on you, and doesn’t make it harder on everyone else!

While leveling, or while trying to get to the item level cap, always prioritize item level over stats, regardless of what those stats are [note, Normal Quality white items break this rule as they are exceptionally bad 99.999% of the time. Other than that, this model holds true]. There is a very common misconception that Tenacity should be avoided at all costs, but this is incorrect. It is not a useless stat, it is just less efficient at increasing damage than other stats are, which is why we will almost never meld Tenacity.

GNB is very flexible and as such can make use of a variety of skill speeds with relative ease. Typically, GNB prefers speeds between 2.40 and 2.43. 2.40 in the past was viewed as a sort of baseline for the optimal speed, but in practice this doesn’t hold true unless there are fight-specific reasons to favor 2.40 over any of the other speeds.

Preferred speed will depend mainly on fight alignment/transitions and your ping, as well as gearing options available. Higher ping players will prefer slower speeds because there is more time to be able to double weave between GCDs. Faster speeds are only typically preferred if they gain meaningful GCDs in a fight, or if gearing options mean that a faster speed is just going to have better damage overall.

Our basic priority system for materia melding is Critical Hit, then Skill Speed (to preferred tier only), then Direct Hit. We may use a different meld here and there that breaks the mold of this priority system, but it is very rare and will likely only be one meld, such as a Determination meld instead of a Direct hit meld due to stat tiering.

This guide would not be possible without the advice and peer review of Hopps, Rin, Ari, Sila, and the other members of the Balance tank community who took the time to read this and give feedback.